Ireland is an island in the North Atlantic separated from Great Britain to its east by the North Channel, the Irish Sea, and St George’s Channel. It is the second-largest island of the British Isles, trailing only Great Britain, the third-largest in Europe, and the twentieth-largest on Earth.

Politically, Ireland is divided between the Republic of Ireland (officially also named Ireland), which covers five-sixths of the island, and Northern Ireland, a part of the United Kingdom, which covers the remaining area and is located in the northeast of the island. In 2011 the population of Ireland was about 6.4 million, ranking it the second-most populous island in Europe after Great Britain. Just under 4.6 million live in the Republic of Ireland and just over 1.8 million live in Northern Ireland. 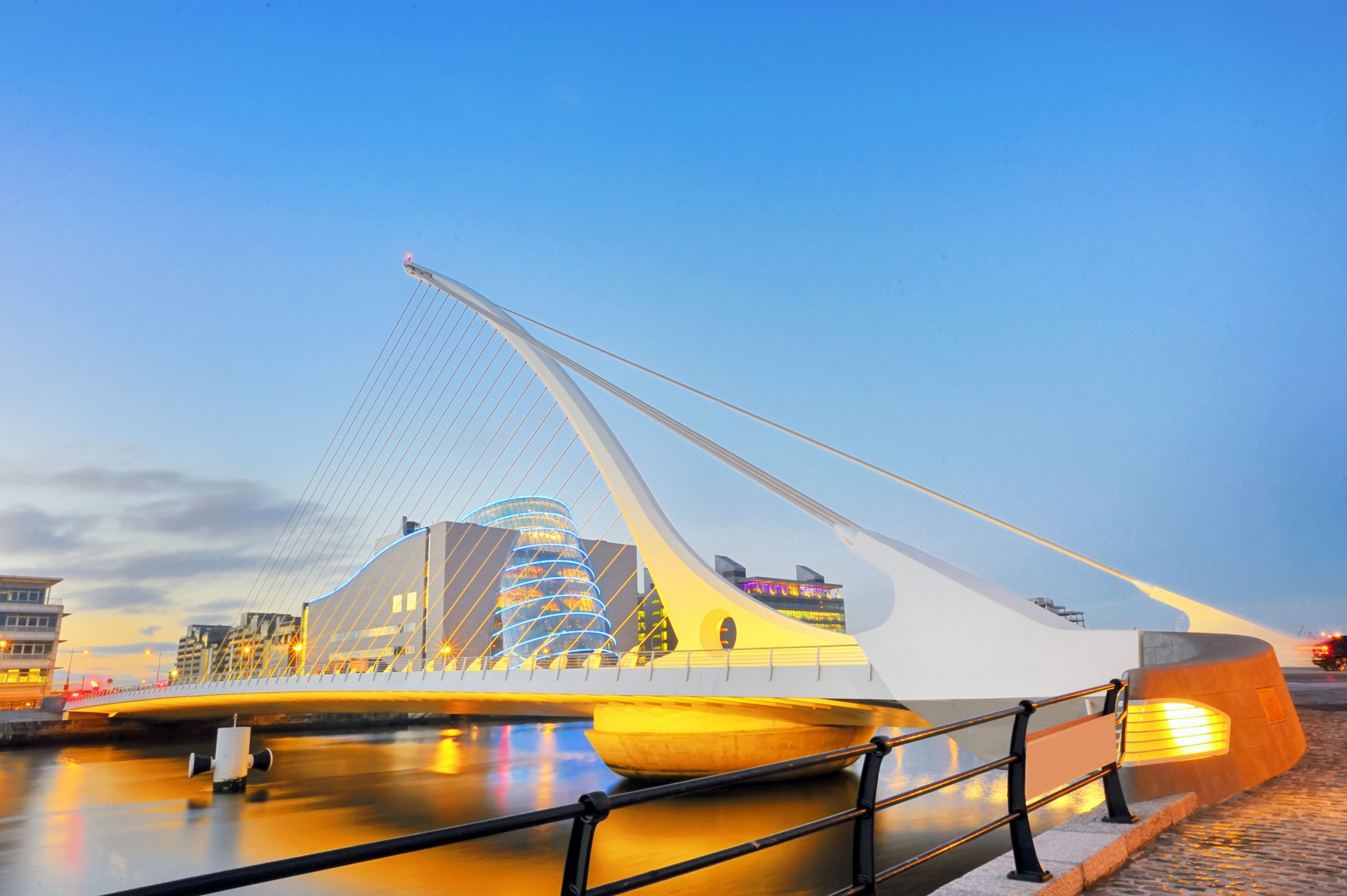 The island’s geography comprises relatively low-lying mountains surrounding a central plain, with several navigable rivers extending inland. The island has lush vegetation, a product of its mild but changeable oceanic climate, which avoids extremes in temperature. Thick woodlands covered the island until the Middle Ages. As of 2013, the amount of land that is wooded in Ireland is about 11% of the total, compared with a European average of 35%. There are 26 extant mammal species native to Ireland.

Prehistoric Ireland saw the arrival of humans after 8000 BCE. Gaelic Ireland had emerged by the 1st century and lasted until the early 17th century. The island was Christianised from the 5th century onward. Following the Norman invasion in the 12th century, England claimed sovereignty over Ireland. However, English rule did not extend over the whole island until the 16th–17th century Tudor conquest. This led to colonisation of Ireland by settlers from Britain. In the 1690s, a system of Protestant English rule was designed to materially disadvantage the Catholic majority and Protestant dissenters, and was extended during the 18th century. With the Acts of Union in 1801, Ireland became a part of the United Kingdom. A war of independence in the early 20th century was followed by the partition of the island, creating the Irish Free State, which became increasingly sovereign over the following decades, and Northern Ireland which remained a part of the United Kingdom. Northern Ireland saw much civil unrest from the late 1960s until the 1990s. This subsided following a political agreement in 1998. In 1973, both parts of Ireland joined the European Economic Community.

Irish culture has had a significant influence on other cultures, especially in the fields of literature and, to a lesser degree, science and education. Alongside mainstream Western culture, a strong indigenous culture exists, as expressed through Gaelic games, Irish music, and the Irish language. The culture of the island has also many features shared with Great Britain, including the English language, and sports such as association football, rugby, horse racing, and golf.

Discrimination
Traditionally, Ireland is subdivided into four provinces: Connacht (west), Leinster (east), Munster (south), and Ulster (north). In a system that developed between the 13th and 17th centuries, Ireland has 32 traditional counties. Twenty-six of these counties are in the Republic of Ireland and six are in Northern Ireland. The six counties that constitute Northern Ireland are all in the province of Ulster (which has nine counties in total). As such, Ulster is often used as a synonym for Northern Ireland, although the two are not coterminous.

In the Republic of Ireland, counties form the basis of the system of local government. Counties Dublin, Cork, Limerick, Galway, Waterford and Tipperary have been broken up into smaller administrative areas. However, they are still treated as counties for cultural and some official purposes, for example postal addresses and by the Ordnance Survey Ireland. Counties in Northern Ireland are no longer used for local governmental purposes, but, as in the Republic, their traditional boundaries are still used for informal purposes such as sports leagues and in cultural or tourism contexts.

City status in Ireland is decided by legislative or royal charter. Dublin, with over 1 million residents in the Greater Dublin Area, is the largest city on the island. Belfast, with 579,726 residents, is the largest city in Northern Ireland. City status does not directly equate with population size. For example, Armagh, with 14,590 is the seat of the Church of Ireland and the Roman Catholic Primate of All Ireland and was re-granted city status by Queen Elizabeth II in 1994 (having lost that status in local government reforms of 1840). In the Republic of Ireland, Kilkenny, seat of the Butler dynasty, while no longer a city for administrative purposes (since the 2001 Local Government Act), is entitled by law to continue to use the description.

Culture
Ireland’s culture comprises elements of the culture of ancient peoples, later immigrant and broadcast cultural influences (chiefly Gaelic culture, Anglicisation, Americanisation and aspects of broader European culture). In broad terms, Ireland is regarded as one of the Celtic nations of Europe with Scotland, Wales, Cornwall, Isle of Man and Brittany. This combination of cultural influences is visible in the intricate designs termed Irish interlace or Celtic knotwork. These can be seen in the ornamentation of medieval religious and secular works. The style is still popular today in jewellery and graphic art, as is the distinctive style of traditional Irish music and dance, and has become indicative of modern “Celtic” culture in general.

Religion has played a significant role in the cultural life of the island since ancient times (and since the 17th century plantations, has been the focus of political identity and divisions on the island). Ireland’s pre-Christian heritage fused with the Celtic Church following the missions of Saint Patrick in the 5th century. The Hiberno-Scottish missions, begun by the Irish monk Saint Columba, spread the Irish vision of Christianity to pagan England and the Frankish Empire. These missions brought written language to an illiterate population of Europe during the Dark Ages that followed the fall of Rome, earning Ireland the sobriquet, “the island of saints and scholars”. Since the 20th century the Irish pubs worldwide have become, especially those with a full range of cultural and gastronomic offerings, outposts of Irish culture.

The Republic of Ireland’s national theatre is the Abbey Theatre founded in 1904 and the national Irish-language theatre is An Taibhdhearc, established in 1928 in Galway.Playwrights such as Seán O’Casey, Brian Friel, Sebastian Barry, Conor McPherson and Billy Roche are internationally renowned.

Sport
The island of Ireland fields a single international team in most sports. One notable exception to this is association football, although both associations continued to field international teams under the name “Ireland” until the 1950s. An all-Ireland club competition for soccer, the Setanta Cup, was created in 2005.

Gaelic football is the most popular sport in Ireland in terms of match attendance and community involvement, with about 2,600 clubs on the island. In 2003 it represented 34% of total sports attendances at events in Ireland and abroad, followed by hurling at 23%, soccer at 16% and rugby at 8%and the All-Ireland Football Final is the most watched event in the sporting calendar. Soccer is the most widely played team game on the island, and the most popular in Northern Ireland.Swimming, golf, aerobics, soccer, cycling, Gaelic football and billiards/snooker are the sporting activities with the highest levels of playing participation. The sport is also the most notable exception where the Republic of Ireland and Northern Ireland field separate international teams. Northern Ireland has produced two World Snooker Champions.

Science
The Irish philosopher and theologian Johannes Scotus Eriugena was considered one of the leading intellectuals of his early Middle Ages. Sir Ernest Henry Shackleton, an Irish explorer, was one of the principal figures of Antarctic exploration. He, along with his expedition, made the first ascent of Mount Erebus and the discovery of the approximate location of the South Magnetic Pole. Robert Boyle was a 17th-century natural philosopher, chemist, physicist, inventor and early gentleman scientist. He is largely regarded one of the founders of modern chemistry and is best known for the formulation of Boyle’s law.

19th century physicist, John Tyndall, discovered the Tyndall effect. Father Nicholas Joseph Callan, Professor of Natural Philosophy in Maynooth College, is best known for his invention of the induction coil, transformer and he discovered an early method of galvanisation in the 19th century.

Other notable Irish physicists include Ernest Walton, winner of the 1951 Nobel Prize in Physics. With Sir John Douglas Cockcroft, he was the first to split the nucleus of the atom by artificial means and made contributions to the development of a new theory of wave equation. William Thomson, or Lord Kelvin, is the person whom the absolute temperature unit, the Kelvin, is named after. Sir Joseph Larmor, a physicist and mathematician, made innovations in the understanding of electricity, dynamics, thermodynamics and the electron theory of matter. His most influential work was Aether and Matter, a book on theoretical physics published in 1900.

George Johnstone Stoney introduced the term electron in 1891. John Stewart Bell was the originator of Bell’s Theorem and a paper concerning the discovery of the Bell-Jackiw-Adler anomaly and was nominated for a Nobel prize. Notable mathematicians include Sir William Rowan Hamilton, famous for work in classical mechanics and the invention of quaternions. Francis Ysidro Edgeworth’s contribution of the Edgeworth Box remains influential in neo-classical microeconomic theory to this day; while Richard Cantillon inspired Adam Smith, among others. John B. Cosgrave was a specialist in number theory and discovered a 2000-digit prime number in 1999 and a record composite Fermat number in 2003. John Lighton Synge made progress in different fields of science, including mechanics and geometrical methods in general relativity. He had mathematician John Nash as one of his students.